What do you get when you combine a longer ice-free season in the Arctic with unseasonably warm temperatures? In some cases “algal soup.” And where would one discover algal soup in the Arctic? For our lagoons research crew, it was in the shallow waters of Aukulak Lagoon, just north of Kotzebue on southern coast of Cape Krusenstern National Monument. Aukulak Lagoon is covered by ice for most of the year. During the summer season, ice melts off the lagoon, leaving water that is bounded by the sandy edges of the Chukchi Sea shoreline and highland tundra permafrost to create a shallow, brackish and productive waterbody. With only a short open water season and no agricultural nutrients (which are a common source of these eutrophic events in more populated areas), Aukulak Lagoon might seem like one of the least likely places one might find a massive algal bloom. That is why what we found seemed so remarkable.

Sampling whitefish at the site of an algal bloom in 2016 in Aukulak Lagoon near Kotzebue, Alaska. Photo Jessica L. Bryant

In August, 2016, our lagoons research crew, accompanied by members of the National Parks Service’s videography team went out for what we thought was a typical round of fish sampling. While the sampling itself was routine, the weather over the past week had been anything but normal for autumn in northwestern Alaska. The last few days of August had been unseasonably warm, approaching 70°F, well above the average monthly high of 56°F – a positive heat wave in this area! As part of our commute, we hauled our boats from the Chukchi Sea over the narrow marine berm into the lagoon water that looked like chocolate milk. The culprit, algae, was washing up on shore forming a congealed algal bathtub ring around the entire lagoon. Visibility in the water was essentially zero, and the tiny gelatinous strands of algae could be cupped out of the water held in your hand. However, despite the drastic change in the water, we fished all day and found no obvious effects on the fish we were catching.

Large algal blooms may be relatively undocumented at high latitudes, but are likely on the rise across Arctic lagoons in Alaska. Perhaps connected, productivity of the Arctic Ocean has increased by 47% from 1997-2015. While large algal blooms are common summer events in many freshwater and brackish water ecosystems at lower latitudes, blooms of this scale and at this time of the year in the Arctic raise many questions and also raised the eyebrows of our local partners. Alaska Native communities have been fishing these lagoons for millennia, and local fishermen are truly concerned about the seemingly new phenomenon of large algae blooms. As we later described the event to Cyrus Harris, an experienced subsistence fisherman from Kotzebue, he pulled out his smartphone and showed us pictures from this summer of an algal bloom in another lagoon. He expressed concern about the increased frequency of algal blooms and what it could mean for the subsistence fish that his community depends on.

With a longer ice-free season, algal blooms are likely to become a more common event within the coming years. Of concern to us is that blooms at lower latitudes are often accompanied by large scale fish die offs, often seen in the media as pictures of masses of dead fish floating in the water or washing up on beaches. To our knowledge and that of our local partners, there have been no catastrophic die-offs from algal blooms observed in the Kotzebue region. However, as the Arctic continues to warm, it may only be a matter of time until algal blooms release the large amounts of toxins into lagoons at concentrations that could cause a fish die-off. 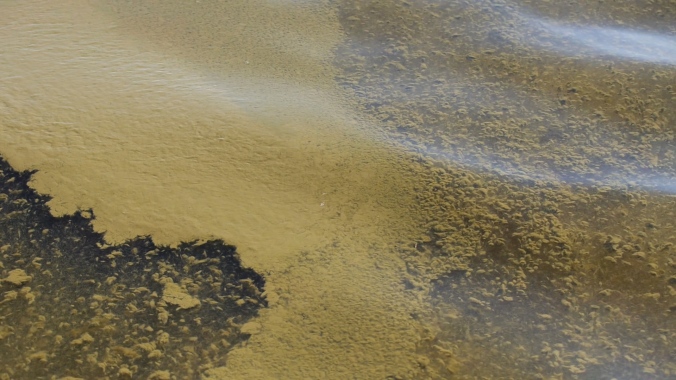 Recent research has shown that pinnipeds –seals, sea lions and walruses– in Alaska, most of which feed heavily on fish and shellfish, have high levels of the algal toxins domoic acid and saxitoxin. Given that both seals and fish are critical to local food security, it is no wonder that the blooms of concern to researchers and local residents alike. Alex Whiting, the lead scientist for the Native Village of Kotzebue, points out that there is a general lack of awareness of the issue outside of the local community and marine mammal scientists, noting “It’s concerning when we see the impacts (of algal blooms) in the Great Lakes and California… (but) the local issue will continue to be esoteric until there is a die-off”. Whiting and WCS are working hard to ensure there is more research and monitoring of algal blooms in these lagoons so that we have the information necessary for managers and fishermen to respond to this new phenomenon.